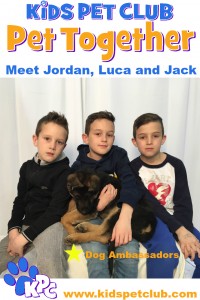 Favourite animal: Jordan loves dogs and his favourite breed is the “Hot dog” (aka. the dachshund). Luca’s favourite animal is the turtle because, he says, even though they don’t move much he still finds them very interesting

Why are you an pet pal?

Luca says that he would be a good pet pal because he has a lot of empathy for animals and always tries to imagine things from their perspective. One of Luca’s favourite moments with his dogs is playing with Kaya and suddenly realizing that he was training her to retrieve one of her favourite plush toys without really intending to do so.

Jack says that he would be a good pet pal because he has a passion for animals. One of Jack’s favourite memories with Cassius is playing with his tug toy and trying to pull it away from him and then unexpectedly falling backward as the puppy let go.

Jordan says that he would be a good pet pal because he enjoys playing with his dogs. One of Jordan’s favourite memories with Kaya is cuddling with her on the ground.